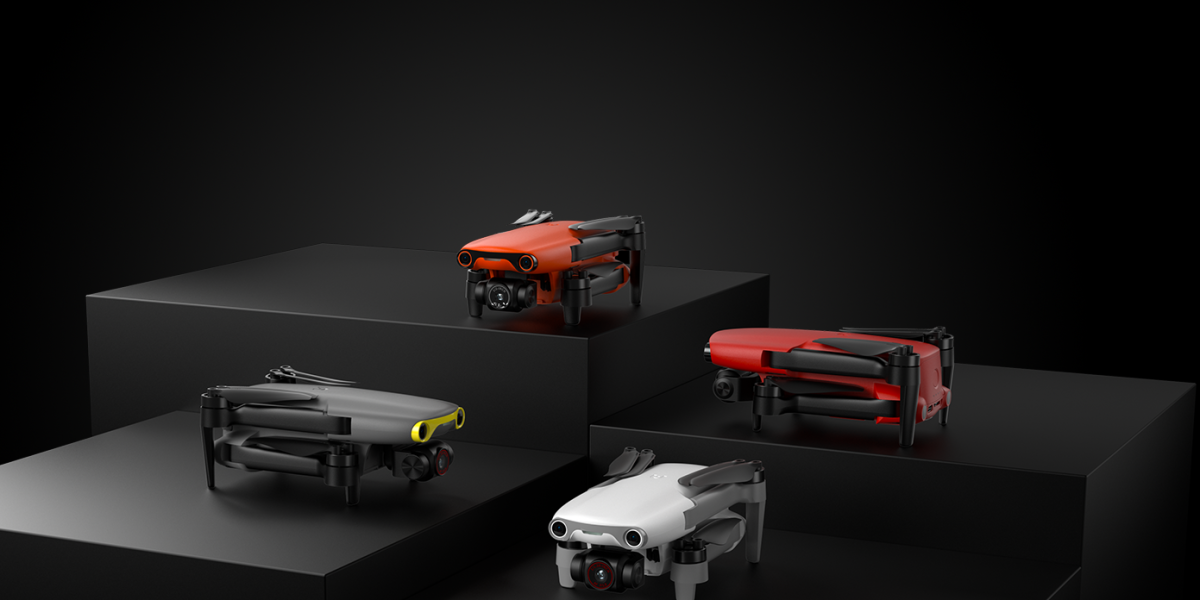 A few days ago, the drone market took a turn. The Autel company, which previously created drones such as Evo II or Evo I, showed a new pocket drone. Autel Evo Nano and Lite.

Autel Evo Lite will be available in 2 versions. Lite and Lite +. The basic Lite version will have matrices (1 / 1.28 ”) saving movies in 4K, HDR and photos in 50 Mp. The drone, despite the matrix smaller than Lite +, which will still manage even in the most difficult lighting conditions. The new Autel SkyLink communication system works at 2.4, 5.8 and 5.2GHz.

This is to ensure transmissions in 2K resolution with a range of almost 11km. In addition, the Autel Lite system is to appear on board the SonarSound system, which works on the principle of a microphone built into the controller, which will allow you to record sounds from the ground.

A revolution on the drone market is the introduction by Autel, a 4-axis gimbal that is to allow vertical recording. This is a good solution in the world of platforms such as TikTok.

Autel gains additional points against DJI with these plays. The competition does not offer a drone with a 4-axis gimbal, which means that Autel tries to be inventive and original.

The new Autel drone in its best Lite + version is to have a 1-inch matrix with an aperture from F2 to F11 and recording movies with a resolution of 6K at 30 fps. For a drone of a small size, this is a really impressive result.

The drone will work both in the hands of professional filmmakers and amateurs, thanks to its autonomous functions, such as the improved Dynamic Track 2.1 mode, which is called Active Track by the competition.

Everything indicates that the new Autel drone is better than the Mavic Air 2s, but these are only appearances and what is good on paper does not always turn out to be good in reality. Time will tell as soon as the new drone begins to reach mass audiences.

The drone is also supposed to do well in low light thanks to the 1-inch matrix we mention above. Of course, a large role will be played by software which, as we know from history, is sometimes treacherous and without good software even the image from the largest matrix will not differ from the material recorded with the flagship.

Autel Evo Nano + and Evo Nano – better than the Mini 2?

Autel is on the heels of the competition. The Mini 2 was a great drone but it had its drawbacks, including the lack of sensors. And here comes Autel who introduces obstacle avoidance sensors in his budget drone. This is an amazing undertaking because no drone in the weight category up to 249g had such a function.

The basic version of Evo Nano will have a 48 ”pixel matrix, thanks to which we will be able to record movies in 4K at 30 frames per second. The 3-axis gimbal is to be responsible for the stabilization, unfortunately the manufacturer did not introduce the 4-axis Nano as in the Lite.

The battery of the new aircraft from Autel is to allow 28 minutes of flight, if this is a realistic result, then it is enough. When it comes to sensors, there is no 360 ° protection as in other drones, but what more can you expect from a drone in this price category.

Evo Nano + has a matrix in the size of 1 / 1.28 ”with a sensor that guarantees photos in 50Mp. This treatment will give you great image quality at night or in low light. Due to its sensors, the drone is also supposed to have an object tracking function, which is also present in the Evo Lite

Autel’s new drones are expected to cost slightly more than DJI drones. The prices of the Autel Evo Nano in the basic version are to start at $ 649, while the Evo Lite series is to start at $ 1200. In the case of the Evo Lite, the price is absolutely right compared to the possibilities. But I am concerned about the price of the Evo Nano.

The competing Mini 2 costs much less. For me, the Evo Nano should cost a little less, but remember that the Mini 2 does not have sensors and all the new technologies that Evo Nano has.

Autel succeeded with the Evo II series, which was warmly welcomed on the market, but it is not known whether the new drones will repeat the success of its predecessor. We must remember that the Autel company has just shone and let’s hope that time will bring new and better drones. And DJI must know that the competition is on their heels